The pace of development that took place over the period of time is outlined as: 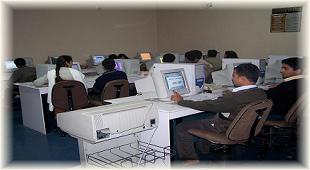 Campus network road map was drawn in 2003 and the process for its implementation using Optical Fiber backbone was initiated.

The Network was made operational in 2004-05 with extension of Internet connectivity to various Departments and Administrative units.

Later an Internet lab was established in the Central Library of the University for creation of a central facility for Scholars and other students.

Video conferencing facility was established in the Central Library in 2005. This facility is extensively used in the Global Understanding Programme being run in collaboration with East Carolina University, USA.

The present Website of the University www.jammuuniversity.in was implemented in 2005 along with mailing facility. The Centre for IT Enabled Services & Management was established in the University during the Year 2005-06.

In the July 2008, University enhanced the bandwidth from 4Mbps to 10 Mbps from Reliance Communications ltd.

In the year 2010(April), University further enhanced the internet bandwidth from 10 Mbps to 30 Mbps.

In the year 2010-11, the University got NKN connectivity which was made operational in Nov/Dec 2011

Presently all the Academic Departments, Centers, Administrative units, Hostels and Guest houses are provided the internet facilities through both wired and wireless mode.